January 21, 2021 – 9:20 pm update: – The lake effect snow has been falling most of the week in the snow belts of the Upper Peninsula and groomers have been out and trails have been improving. The base has gotten stronger in the Western U.P. and the Keweenaw Peninsula. Conditions should be fair-to-good in most of the region. Certainly the best conditions of the season so far.

Groomers were finally able to get out in the snow belts of the Eastern U.P. this week. The base is still thin in some areas but trails should be in poor to fair to good conditions in the hearts of the snow belts.

The snow belts of Northern Lower Michigan area also picked up lake effect snow. Trails are thin and there has only been some very limited grooming. Overall trail conditions are poor with some areas with fair conditions.

Here’s the Snow Depth Map to help you find regions with the most snow.

WEATHER NEWS: Here is the snow in the forecast for this week via the John Dee Graphic Forecast.

Check back later for more updates…

Check the Snow Depth Map for areas with the best snow.

Here are the latest trail reports.

Check out John Dee and the John Dee Forecast Graphic for his take on this week’s weather. 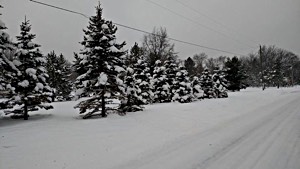